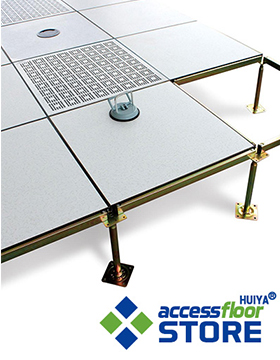 Rolling Loads are the most important performance criteria of Access Floor, as Rolling loads have a more damaging effect on the panel than a static load! The raised access floor panel capable of supporting high rolling load enables clean room and data center operators to upgrade their facilities more safely, quickly and cost effectively. To ensure offer the high-quality access floor with excellent rolling load for customers, HuiYa as one of the Top Raised Access Floor Suppliers in China, strictly and comprehensively tests the rolling load of our anti-static raised floor according to the CISCA concentrated load test.

Rolling Loads may occur when a vehicle follows a dedicated track i.e. an automated post trolley, or a vehicle that manoeuvres randomly, e.g. a pallettruck. Access Floor Rolling Loads (False Floor Rolling Loads) are defined by the number of passes, size and hardness of the wheel, and the combined weight of the cart and its contents on each wheel.

Why Need To Do Rolling Loads Testing for Access Floor?

Rolling Loads Test Procedures for Access Floor is aim to determine the durability and/or deformation of an access floor system when exposed to commercially anticipated caster traffic using a specific load.

HuiYa applies CISCA Recommended Test Procedures For Access Floors with panels installed on actual understructure (this more accurately represents an installed access floor system) to determine what is called Design Load or Working Load. This is the load that can be safely applied without experiencing permanent distortion of the panel - In the case of our Anti-static access floor panel from the example above, the Design Load is ≥5560 for 10 passes and ≥4480 for 10000 passes.

In the below video, we show you the Rolling Load Testing Procedures for HuiYa All-Steel Anti-static Raised Floor, to determine whether our anti-static access raised flooring panels are meeting the required performance levels.

The experimental equipment for the rolling load of the anti-static raised floor tile shall meet the following requirements:

B) Displacement sensor (with peak hold function, accuracy of 3%), can also use X-Y function recorder;

The rolling load test of the anti-static raised floor panel shall be carried out according to the following experimental procedures:

According to A), B), C) test method, move the rolling wheel and displacement sensor to the quarter of the floor, and record the deflection and residual deformation of the rolling load.